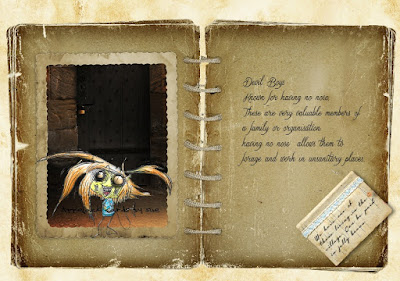 Devil Boy
Part of my huge prize 2015 Halloween Hop
I will be giving the links as soon as I find them
Background
Mischief Circus
Printed onto neenah and coloured with Spectrum Noir pencils
Don't forget to visit the amazing blogs taking part in the hop.. there could be some prizes on the way if you leave some awesome comments. We all look forward so much each year to these wonderful 31 days of creepiness....

We are going to need some help. We really can't enter or leave by the front door unless the couch has been fed and to leave by the back door is really not an option. The stink is practically visible.. sort of a yellowy greenish cloudy barrier. Viki had decided she didn't need 'to go' after seeing the bushes moving on such a still night. The Bestiary had been found. Leigh had been standing on it as she peered out the front window at the couch trying to warn visitors not to get too close. After a flick through the tattered old pages the ideal candidate was found. A Devil Boy. There was a note pinned to the page probably left from the last time the plumbing collapsed. Nan remembered there was one called Darren hanging around last Christmas when the couch kept burping... luckily she had given him egg nog and broken finger sandwiches so he should think kindly of us.  He was last seen looking for a B & B (Bed and Breakfast for non-Brits) and may have ended up round at Val's. We have run out of messenger rats, there are no spiders left (not such a bad thing really), the dust bunnies can't leave even in a breeze and we haven't seen any bats for ages. We needed Darren as soon as possible and we knew who would be brave enough for the task.
Val and Nan decided they would climb out the pantry window. Avoiding both the killer couch on the porch and the stinky outhouse by the back door they were dressed for action! Each wore a black and grey onesie, gloves and wellies and had face paint on to blend in with the surrounding countryside..
Posted by applejack cards by sue at 22:27