Day 16 of the Halloween Hop 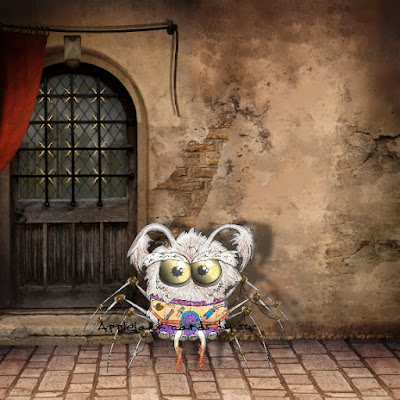 Part of my huge prize 2015 Halloween Hop
I will be giving the links as soon as I find them
Background
Mischief Circus
Printed onto neenah and coloured with Spectrum Noir pencils and Promarkers
Don't forget to visit the amazing blogs taking part in the hop.. there could be some prizes on the way if you leave some awesome comments. We all look forward so much each year to these wonderful 31 days of creepiness....


It had been fairly quiet by the back door. No one was venturing outside until the ladies returned with Darren. The scrit scrat scratching started off fairly quietly then suddenly sped up and became louder. One of the spiders had totally transformed and had been busy in the cellar strengthening his legs with cogs and studs. Septamus would never fit under a glass now or be sucked up one of those spider catchers. 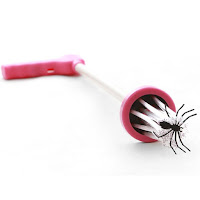 Venom, gloopy and sticky dripped from his fangs as he scuttled across the floor. Sep looked towards the walls and shook his head. Humm... walls didn't seem such a good idea. He probably won't be able to drop onto unsuspecting folk from the ceiling but he could trip up any Things, Bumps and Moaners and his web was now extra strong and really quite flexible... now able to be fire around corners. Sep knew he would need a bit of training to be able to throw his web accurately so he started practising on any passing creatures. He did try to wrap his web around Rebecca but she was too quick for him and nimbly got out of the way.
The Were Dust Bunnies were beginning to flex their muscles and attempting to control the situation. A few had banded together.. bravely climbing up the vacuum cleaner pipe with some coins and clips. With a bit of a squeeze the smallest of them managed to get close to the motor and sabotaged the death machine! A cheer went up from the rest of her clan.

Posted by applejack cards by sue at 22:53