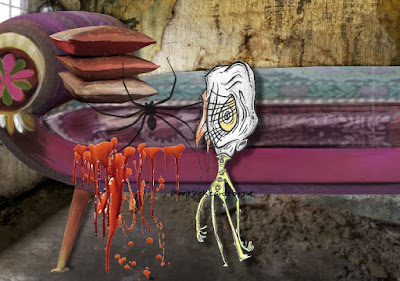 
The creatures under the bed had evolved to being much flatter than before.. keeping their long arms sharpened ready to catch unweary ankles. They had seen more than the usual amount of dripping red stuff and knew how difficult is was to get the stains out. This is Gerald and it was going to be up to him to gather the rest of his family who were living in the attic overlooking the lake (Yes that lake (yikes!)) They needed backup to keep a look-out whilst they moved into the gap between the wardrobe and the carpet as the mattress was now so soggy that stuff was dripping into their evening meal.
Leigh had sent a note saying she would be there as soon as possible with popcorn if she managed to get past the evil couch on the porch.. the couch last seen swallowing the carol singers last Christmas. Chuckles entered the cleaning cupboard and sniffed the fetid air. She was sure she detected the stench of broccoli but knew that just could not be. The gloopy liquid glistened in the jar as she upended it into her bucket and small irregular bubbles covered the surface of the grey contents.
Posted by applejack cards by sue at 23:19