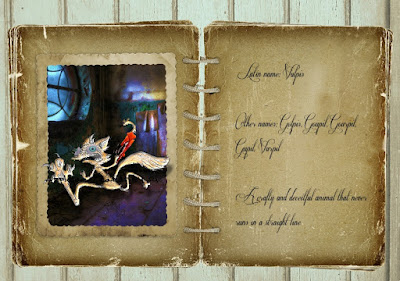 Part of my huge prize 2015 Halloween Hop
I will be giving the links as soon as I find them
Background Abandoned and Bottle of Ink and Nightmare
for Mischief Circus
Printed onto neenah and coloured with Spectrum Noir pencils
Don't forget to visit the amazing blogs taking part in the hop.. there could be some prizes on the way if you leave some awesome comments. We all look forward so much each year to these wonderful 31 days of creepiness....

The Thing in the Cupboard complained a bit about the new latch on the door. How was the hinge supposed to creak menacingly when the latch had been well oiled and kept the door tightly closed. In fact he kept pushing against the inside of the door with so much force he split into three. He was quite surprised but just nodded his head at his new family members and after they had shaken the gunge off themselves and fluffed up their eyebrows all three started pushing the cupboard door steadily and with as much pressure as they could muster. As you well know, if you push as hard as you can sometimes you don't stop in time and Thing had pushed and his two 'offspring' had pushed and suddenly the door flew open grabbing Thing's arm at the same time as he was running through and... it was ripped off at the elbow spraying blood everywhere. He knew he would have to clean up the soggy end as it would create a trail easy to follow..easy enough for a Dust Bunny to find him.
Nan, who had helped so much last Halloween and of course at Creepmas must be contacted somehow. It was going to be risky as non of the creatures knew which side the ladies would take care of. A few of the ladies had already arrived, Val and Mary were talking about their own experiences with Squee's. Thing could hear them upstairs as he crept up the stairs  towards the bathroom. He was too far away to stop his buddy's opening the front door and leaning against the couch. The tassel's quivered in the slight breeze and the stench of rat filled their nostrils as items which had been lost down the back of the couch were thrown with great force. A few coins thrown at speed cut through the newbie Things burning through their bodies leaving holes which would never heal. The Things died without really living.

Posted by applejack cards by sue at 23:38