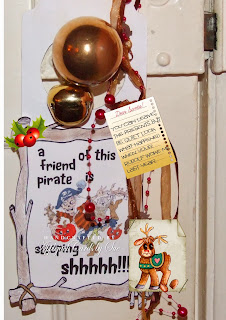 Here we have Rick's Panicky Pirate Well, the warning had been on Jaydn's door since Halloween.. the jingle bell was there as an early warning system in case any trick or treaters should call expecting sweets instead of leaving them for the occupant. It would also warn of any little sisters who might 'accidentally' walk into the room.
Now with Creepmas coming up there is the added problem of a shifty looking fella with a sack and oh yeh...he's leaving presents not taking them??? For a start...this reindeer pretended to be a he...he can't be...males lose their antlers, the females keep theirs - therefore Rudolf was a female (as were the rest of the team)

According to the Alaska Department of Fish and Game, while both male and female reindeer grow antlers in the summer each year (the only members of the deer family, Cervidae, to have females do so), male reindeer drop their antlers at the beginning of winter, usually late November to mid December. Female reindeer retain their antlers till after they give birth in the spring.
Therefore, according to every historical rendition depicting Santa's reindeer, every single one of them, from Rudolf to Blitzen ... had to be a female.

Rudolfina then ate my carrots,, just walked right in without a by- your- leave and ate my supper. So Rudolfina was roughed up a bit...it could have been a passing elf what did it guv'.   The mincepies that were left by the bedtime milk were also stolen, only crumbs were left. So, this year we are ready for you, the rats who ambushed the elf a couple of days ago have been recruited. There is still a supply of squishy pumpkins ready as ammo, the witches and the cats and bats are standing by. Ready. You have been warned.
Posted by applejack cards by sue at 00:43