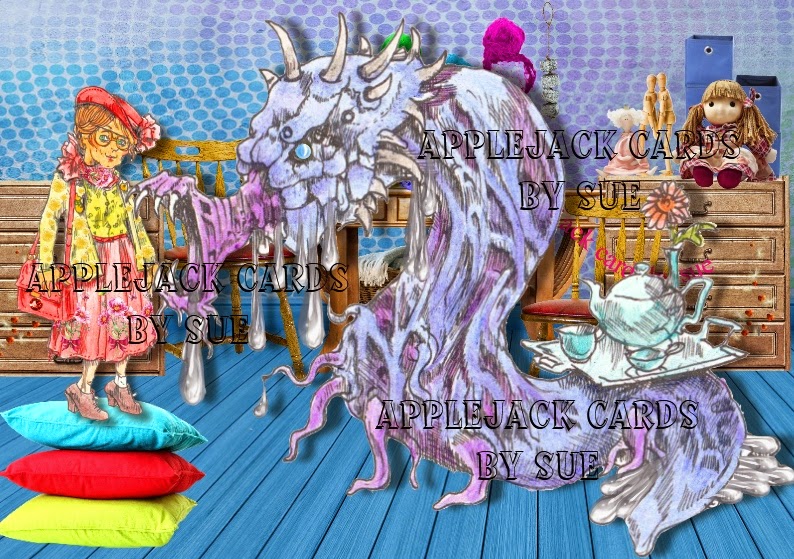 Really Cilla is getting a bit peeved at being called a Monster Slug. Her species is a beautiful lilac colour in the Springtime, even her slime isn't really as bad as some of the smaller slugs think... just the exact amount of sticky which does come in handy when carrying items such as tea trays and cutting machines. Here Cilla is trying to warn Finola about the dangers of too much macrame and pompoms without Evilena noticing what is going on behind her back. Cilla has already cleaned up the spilled paint and the pencil shavings. The ants and the cupcake are outside in the bin. And Finola has climbed on some rather nice home made cushions so that she can go eye to eye with Cilla which hopefully will help them whisper about pompoms without our Finola getting sprayed with goo. Cilla's friend Fiona is trying to keep Evilena in the kitchen as Evilena has got quite a temper. But suddenly the backdoor opens with such force that it slams against the wall. The ladies shriek, well Cilla's shriek is more of a very loud gurgle (But very effective) And there stands.....

If you have an idea of who startled Finola then please visit the Rick St. Dennis facebook page and leave a comment describing the character. This could be chosen as the next main element, you and I will receive a copy of the image free of charge. I will colour mine and add the next part of the story.
Posted by applejack cards by sue at 22:55