On the First Day of Creepmas 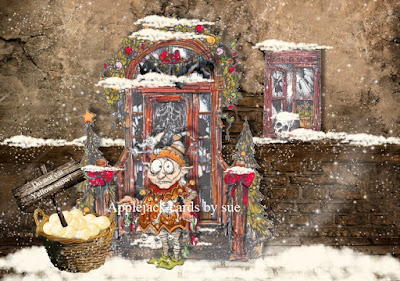 Kevin had survived Halloween. Fifi had finally dried her fur and of course it had gone frizzy. Betty who lived in Kevin's pocket had come off worse. She died the day Kevin was rescued from the lake. One of the ghouls was a part time taxidermist and he treated and stuffed Betty and arranged her in an almost natural position and stitched her into Kevin's front pocket. Kevin was feeling festive. He strung Creepmas lights outside his house underneath the bats. The bats were quite annoyed at this but stayed where they were after Kevin had tied their legs to the wires which held the lights in place. In fact.. the waving of their wings lent a somewhat cozy look to the place. It was agreed amongst the animals of the lake that a party should be held at Kevin's Pit.. of course no-one thought to ask Kevin if he minded. Kevin had just settled down to watch Dragons Den.. one contestant had just been barbequed and another was waiting to see if he had answered correctly when there was a loud knock on the door.

I have been invited to be a Guest Designer at the Dream in Darkness Challenge Blog. I am so pleased and honoured to have been asked and I hope you will visit them for much more creepiness.
As always I used neenah, promarkers, pencils and Craft Artist 2
Posted by applejack cards by sue at 23:34