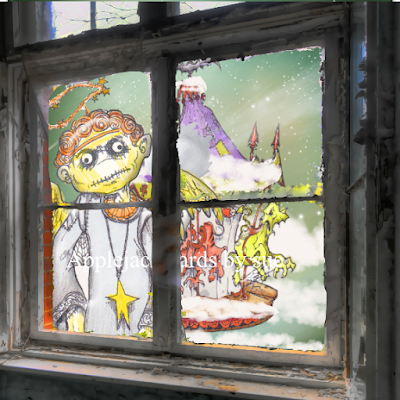 Carnivorous Angel Butch
Scary go round carnival de la nuit scene
Background Abandoned for Mischief Circus
There was such a racket outside the living room window. By the time Kevin had clambered over the wreckage of the couch which was burping rather loudly and had reached the window he saw Butch peering back at him and behind Butch was the creepiest carousel. It was like the flamin' Dingles had set up for one of their weddings. But here the horses looked nothing like carousel rides. These looked more like nightmares. At least Butch had tried to be a bit festive but he had seen what had happened to Doris and he had decided to stay put in the garden. Kevin thought that someone should have asked permission to erect a carousel in his garden especially one whose creatures weren't as wooden as they should have been. A passing rabbit was scooped up and slowly crunched... just bits of fur was left decorating the snow. Patsy, Graham and Dennis (The zombie kids) came running down the stairs clamoring to get outside. As they sped through the hall Donna flung open the front door and the kids left Kevin's house without even pausing to say Thank You. Donna slammed the door behind them and everyone joined Kevin by the window waiting to see what happened when kids met carousel. Patsy  rammed the remains of Fifi's water bowl into the mechanism and the ride came to a shuddering stop. Dennis and Graham climbed on board the demonic creatures, cuddling their throats with sharpened fingers. Patsy leapt onto the last ride and held fast whilst she knocked the shards of the bowl away with her brothers arm (very kindly lent by Dennis)  The music started and the demons bucked. The kids hung on yelling Tally Ho! The carousel cracked as the demons broke away heading down the lane with the shrieking kids happily bumping into each other scattering forest folk as they passed by the lake.


I have been invited to be a Guest Designer at the Dream in Darkness Challenge Blog. I am so pleased and honoured to have been asked and I hope you will visit them for much more creepiness.
As always I used neenah, promarkers, pencils and Craft Artist 2

Posted by applejack cards by sue at 23:50