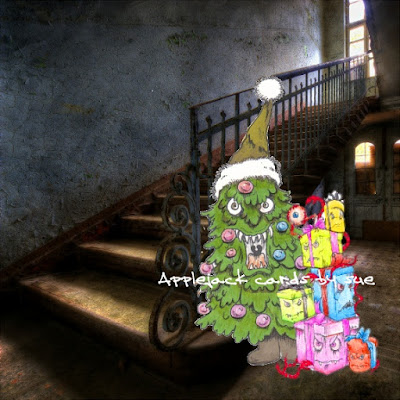 The presents had been left under the Christmas tree. Kevin did wonder whether or not it was a good idea to have a Real tree this year. He didn't know that trees could look so stroppy especially when each present was growling at the others and somehow managed to nip its branches. In fact.. before long there was ribbon flying all over the place as Reg (The tree) lifted his branches out of the way and bit down on the tags, ripping them off and shredding them scattering the bits over the rugs. Donna had arrived just in time..she was the only one to spot the yellow snowballs by Kevin's front door and brought the dripping basket into the house. Sharon heard the rumpus and marched out of the kitchen sliding on the fingers and cursing the ghouls who had assured her that they were hung for 21 days (just like Sainsbury's beef) and were well moldy therefore  shouldn't have been slippery at all. Sharon slid right into the tree which turned and bit her quite badly. She dripped blood all the way back into the kitchen muttering under her breath about axes.. dull axes. Donna and Fiona started pelting Reg with the snowballs with Reg retaliating with his baubles. Reg growled at Donna but she stood firm. Nan and Val joined her and together they pulled Reg's Santa hat down over his eyes. They knew, that like a chicken Reg would not move when he couldn't see.

I have been invited to be a Guest Designer at the Dream in Darkness Challenge Blog. I am so pleased and honoured to have been asked and I hope you will visit them for much more creepiness.
As always I used neenah, promarkers, pencils and Craft Artist 2
Posted by applejack cards by sue at 23:52