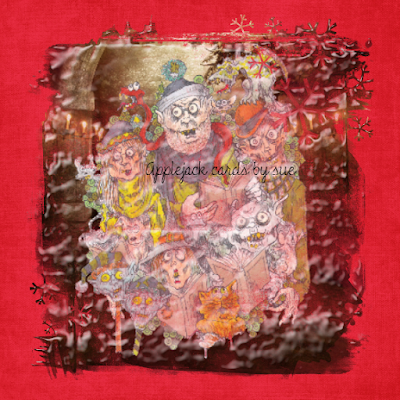 It was the day before Creepmas Eve. All was fairly peaceful.. No unwanted visitors, no Creepmas movies. The Demon couch was out on the front porch just in case Nan tried to plump up the cushions.. Leigh had a go and got a nasty nip. Kevin was helping Fifi clear up the kitchen when he heard the strangest sounds. A loud scuffle and banging and shout-singing.
Deborah opened the front door and... carol singers! They were trying to drag the couch off the porch or at least to pull some boots out from under a cushion. It turns out that Polly had wanted a rest and had sat down when really she should have been singing with gusto. The couch had still been feeling a bit peckish and had nibbled her bum. She had obviously tasted quite nice because the next thing she knew was that she had become tangled in the springs and bones. Dan thought he should at least make a bit of money through the loss of one of his singers and started rattling his tin but all he ended up getting was a full card of forged Morrison's stamps (Without an M) (These really are getting forged...
we know 'cos ours were checked yesterday) By the time the rest of the ladies gathered at the bottom of the stairs Dan and his group had elbowed their way into the hall and refused to leave.
Donna had found a spell left over from Halloween and, after a quick chat with Val, it was decided to have a go at building a portal. Donna and Fiona read through the instructions and started measuring up the downstairs loo. Val was handing round eggnog with squash for those who arrived on broomsticks. When Donna and Fiona slipped back into the hall the portal puddle opened. Now all that was needed was to simply wait until the copious amounts of eggnog and juice did their job and the requests to use the 'powder room'.... the two witches queued  outside whilst Gary went in.
The door creaked open again.. the loo was empty. oh well.. Petra, who was so skinny that Kevin had seen more meat on a Butcher's pencil went on in whilst Cathy went back to see if the snakes needed 'to go'. She collected them and the rats and went back to the empty room. She stepped inside and locked the door. Once again the door opened and in went Kitty.
Now there were more singers in the loo than were in the living room. When the door opened after the final 'visitor' Kevin took a photo of the full portal and placed a notice on the door just to remind him not to enter till the spell wore off..


I have been invited to be a Guest Designer at the Dream in Darkness Challenge Blog. I am so pleased and honoured to have been asked and I hope you will visit them for much more creepiness.
I would like to thank everyone who has left comments and really joined in the story. It has been a blast and when I was ill my husband read the comments to me. You are all so funny and your comments have been so witty and very very clever. I wish you all a very Happy Christmas and I really look forward to working with you all again.

As always I used neenah, promarkers, pencils and Craft Artist 2

Posted by applejack cards by sue at 00:14