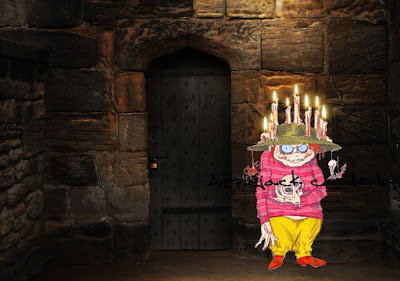 Another flamin' knock at the bloomin' door. Kevin really just couldn't be bothered to open it so just yelled COME IN! The door swung open and there stood a chap with candles on his head.......    Terry felt immediately at home. No-one ever actually invited him to parties but he was always made welcome at Birthday parties... but just 8year old's Birthday parties. It didn't really make a difference that he hadn't actually been invited to this one. He had read about it on Bloodbook and thought it would be nice to catch up on all the news after Nan's rescue of the lake fishes. Suddenly there was the biggest... CRASH! The zombie kids had broken Fifi's water bowl. The tree had toppled over and was crushing the presents which finally burst their boxes and lay there.. no longer moving. Reg (The tree) had a fixed snarl where his mouth should be and a glazed eyeball hanging out. His reign of terror was over and Nan and Donna dragged him through the mayhem of what once was the kitchen and out the back door. They managed to get him as far as the outside loo and bundled him under a bush to be dealt with after Creepmas. They then nipped round to the front of the house and let themselves in. Sharon was shouting in the kitchen and the remaining fingers were walking all by themselves over the blood splattered kitchen floor. Val was trying to keep Lucy away from the sherry which didn't make much difference as Lucy had already done the rounds of the living room slurping up any drinks that had been left just lying around. Squiddy managed to climb in through the kitchen window (after Sharon had locked the back door) and hit the ground running.. she scooped up fingers as she crouched, taking the corner of the dining room like she was on wheels.

There is more news and trouble brewing Nan has managed to bundle a relative of Reg's into the cellar.. details of this are over at Dream in Darkness
I have been invited to be a Guest Designer at the Dream in Darkness Challenge Blog. I am so pleased and honoured to have been asked and I hope you will visit them for much more creepiness.
As always I used neenah, promarkers, pencils and Craft Artist 2

I would like to enter this into the following Challenges

Forever Dark 2
Posted by applejack cards by sue at 23:29