On the 4th Day of Creepmas 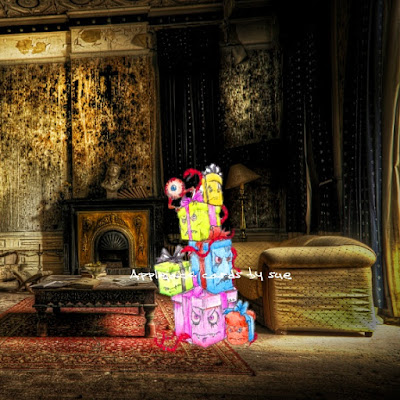 Do not open till Creepmas
by Rick St. Dennis
Background
Abandoned by Mischief Circus
Only the 4th Day and Kevin groaned as he answered the door yet again. It was o.k. to have visitors but he would have rather spread them throughout the year instead of having them just turn up all at the same day. But this time when he opened the door there was no-one there. Santa had come early.. there was just a pile of presents. A bit dingy looking but.. still.. presents were always nice to receive. Kevin looked at the tags and was surprised to see the names all scribbled out (In Cool Grey 5) and his name written rather scratchily in white gel pen over the top. Nan and Fiona arrived just as Kevin was about to pick up one of the presents and carried the rest of them in to the living room. Nan found an eyeball stuck to the top box and felt very uncomfortable as it winked and started flirting with her. Fiona took charge of the snakes .. keeping them away from Fifi.  Kevin hoped that whoever had left the presents had kept the receipt...he really had enough pets with Fifi and poor Betty...  he had no room for snakes.. Lucy had another sherry and complained that she felt she was being watched.

I have been invited to be a Guest Designer at the Dream in Darkness Challenge Blog. I am so pleased and honoured to have been asked and I hope you will visit them for much more creepiness.
As always I used neenah, promarkers, pencils and Craft Artist 2
Posted by applejack cards by sue at 22:02