On the 2nd Day of Creepmas 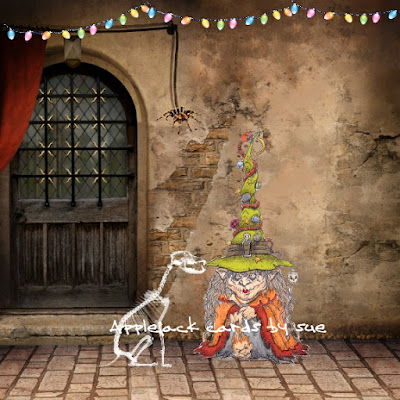 It's the same every year. Family and friends don't always get on. Sharon had arrived early, she had placed baubles on her hat and had added a slash of bright red lippy. She was ready to party.... but didn't know that it was 'The done thing' to arrive at a party a bit late and to make an entrance! Sharon was a bit miffed. She had left her flying monkeys at home..goodness knows they made such a mess at the last party. Kevin had complained about finding scat in the pot plants and Sharon had tried to follow them around with poop bags but couldn't be everywhere at the same time. Kevin decided to untie just one of the bats to take a message to Val and Leigh who have been living with the ghouls.. the message Kevin gave to the bat was ' Help needed, too many visitors' he hoped this time the message would get through... the message sent by bees with Burt lisping nearly added to the disaster at the lake. Kevin's dog Gerald seemed to have taken a liking to Sharon and kept nibbling her baubles and spitting out the wire bits whilst Sid (Sharon's snake) waited and watched for an unguarded moment to strike! Was that another knock on the door?

I have been invited to be a Guest Designer at the Dream in Darkness Challenge Blog. I am so pleased and honoured to have been asked and I hope you will visit them for much more creepiness.
As always I used neenah, promarkers, pencils and Craft Artist 2
There was no way Kevin would allow his friend Nan's comment to be lost in cyber space so he and Sharon managed to copy and paste it here. Thanks Nan. xx

Posted by applejack cards by sue at 22:31