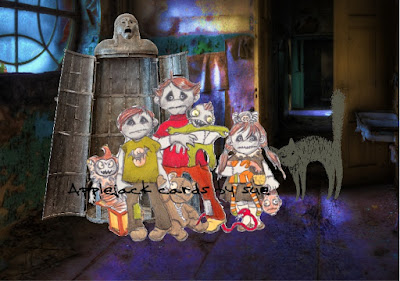 There was a knock on the door, then another and another. Kevin wondered what would happen if he didn't open it. He is a polite Elf so he and Fifi flung open the door and there... three children. Something wasn't quite right. They weren't singing or handing over cookies. They just grunted 'appy Creepmas' and shuffled in wafting a bit of a strange aroma and a trail of skin flakes as they passed by Kevin. Fifi's whiskers twitched as she started hoovering up the flakes without a hoover if you know what I mean. Urgh!
Kevin knew that it wouldn't be a good idea to have the kids in the kitchen with Sharon as last time they met they freaked her out by following her everywhere she went... whispering mummy.. mummy.. mummmmyyyy.... so Leigh helped Kevin shoo them up to the attic playroom where it wouldn't show if anything dropped off them. Anyway a ghost cat lived up there and would sound the alarm if the kids started to go downstairs before Kevin was able to get rid of Sharon.
There was a Tap tap de tap tap.. tap tap on the door. Someone obviously thought they had come to a speak-easy and there was a code knock to be completed. Kevin stomped down the stairs passing another sherry to Lucy as he passed the living room. Best keep her sozzled, she was quieter that way.

I have been invited to be a Guest Designer at the Dream in Darkness Challenge Blog. I am so pleased and honoured to have been asked and I hope you will visit them for much more creepiness.
As always I used neenah, promarkers, pencils and Craft Artist 2
Posted by applejack cards by sue at 23:37