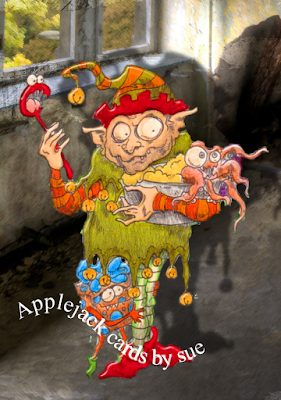 Kevin had thought of laying traps just outside his door. He had found some old mince-pies at the back of the pantry with some green smudges on the crusts (to give a bit of festive cheer). They were quite solid with sharp edges so they would make pretty good missiles if flung from the attic window. He also found a stow-a-way at the back of the pantry..cousin Wilbur. How on earth did he get in there? Wilbur had thought that as he was stirring a Christmas pudding that he would be made welcome. Oh No! Sharon ran at Wilbur with her lips pursed making 'kissing' sounds, her tinsel streaming behind
her. Wilbur shrieked and sidestepped Sharon. He tried to run but a small parcel hung onto his leg so he ended up swinging his right leg out to counter balance the extra weight. This did not bode well. With the mixing bowl in one hand, and a feisty spoon in the other Wilbur ducked to miss the mistletoe and skidded on the eyeball which had finally fallen off the tree and was rolling towards where he had last seen Nan. Sharon was mid spell-cast. She had aimed it towards Wilbur but it hit the spoon which whacked Wilbur across the back of his hand. Startled Wilbur let go of the mixing bowl which flew up into the air, spun round twice and landed on Sharon's head. Sharon promptly vanished! Only her shoes were left in the middle of the hall. Smoke was drifting upwards from the toes... the shoes then just crumbled into dust. Sharon was no more.


I have been invited to be a Guest Designer at the Dream in Darkness Challenge Blog. I am so pleased and honoured to have been asked and I hope you will visit them for much more creepiness.
As always I used neenah, promarkers, pencils and Craft Artist 2
Posted by applejack cards by sue at 00:07