On the 3rd Day of Creepmas 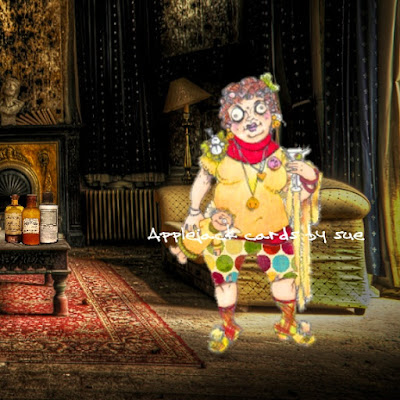 I got decorating to do
by Rick St. Dennis
Background Abandoned
for Mischief Circus


Kevin was tearing his hair out, nearly dislodging Fifi. He hadn't heard anything about a party, and certainly didn't want to have one in his own home.He hadn't expected Sharon to turn up (With or without those dratted monkeys) and she was always trying to help.. or to interfere depending on which way you looked at it. Leigh had arrived with Val on her 4x4 broomstick..(Thank goodness the message got through) they parked out in front of the house so Nan would see it and know that she wouldn't be alone helping Kevin. They tried the kitchen door.. it was unlocked! Not like Kevin at all.. he was usually quite security conscious. And there was Sharon. Kevin had decided it would be a good idea to keep her in the kitchen where she could take charge of the nibbles. He had made sure that the mince-eyes were already in tins in the cupboard and the knees and crackers couldn't be spoiled as they were already wrapped up. He only had to make the tadpole rolls and some of those party snacks.. finger food.. no, real fingers.
There was a very loud banging at the door. As Kevin slowly opened it it was suddenly dragged out of his hand and there was Lucy! She arrived in Christmas gear, martini garnished with a bloodshot eyeball in one hand and a rather tatty angel doll in the other. Oh Great! The last time Lucy was in the same room as Sharon sparks flew. Real sparks! Luckily there was loads of rooms in the house and if Sharon could be kept in the kitchen with Leigh and Lucy in the living room with Val they should have enough time to have a sweet sherry and a mince eye before they were sent on their way.
There was an odd sort of scratching on the hall window as if a branch were scraping back and forth. Kevin wanted to ignore it. He already had two more guests than he had ever had in his house at the same time. Enough was enough.

I have been invited to be a Guest Designer at the Dream in Darkness Challenge Blog. I am so pleased and honoured to have been asked and I hope you will visit them for much more creepiness.
As always I used neenah, promarkers, pencils and Craft Artist 2
Posted by applejack cards by sue at 23:08