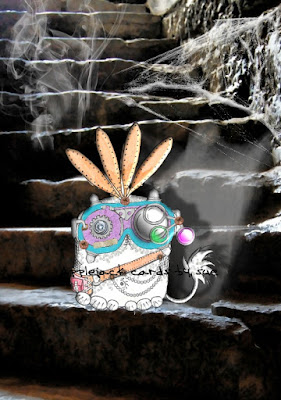 Clang, clang noises could be heard throughout the house as Caroline made her way through the pipe system with her head banging against the slimy walls at every angle. The vibrations were felt right through the house, distorting the pantry door, jamming it into place. Viki was now in the pantry with the last of the elderflower wine. Mary was at the top of the stairs.. still in shock after the encounter with the ghosts.
Sammy was now heading downstairs with the ghosts following behind.. tripping themselves up. They just couldn't get used to wearing flowing robes, after all..if you die wearing trousers how come you end up wearing someone's tatty grey frock? Charley appeared midway down the steps ready to check on the pantry door. He was the one who had tri-focles (let's see Specksavers marketing them!) and could see through any barriers. Viki started knocking on the inside of the pantry door. Not too loud as she hadn't finished the left over jelly beans yet and you never know how long a rescue might take and the jars on the shelves may have been mis-labelled.
Nan and Susan heard the commotion, opened the front door and brought their chairs inside.  Nan went over to the pantry to check that Viki was ok. After being told that all was well and Viki was quite happy to wait for any firemen who may arrive to save the day Nan and Susan settled down again and waited for the fun to start.
Leigh heard a noise in one of the darkened bedrooms and bravely pushed open the door. There, on the bed (with the rather nice duvet set) lay a trussed up lump. As Leigh made her way over she switched on her CSI style torch..one with the faintest light  (Why don't they use a torch with a much bigger beam) The beam of the torch lit up the lump which squealed 'Oh No..where are my glasses?' Leigh hurridly collected the dark glasses with lenses like welding goggles and placed them on the button nose peeking out of a tangle of dental floss. She had found Sue-the author of Halloween Tales and Creepmas Stories. Sue had been firmly bound with the dental floss..who knew there was so much in one of those containers and was surrounded by Were Dust Bunnies. Da Da Daaa!!!!
Posted by applejack cards by sue at 08:22 1 comment: 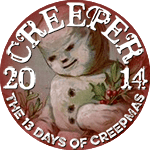