Day One of Halloween 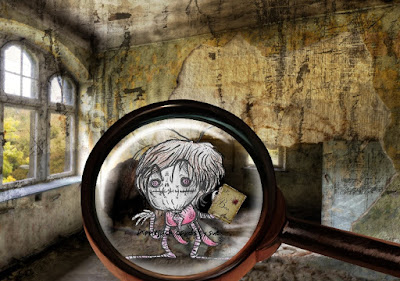 Amazing creepy image (links to follow)
(Terra Abbitray)
Part of my huge prize 2015 Halloween Hop
Background Abandoned and Bottle of Ink
for Mischief Circus
Printed onto neenah and coloured  with spectrum noir pencils and promarkers
Don't forget to visit the amazing blogs taking part in the hop.. there could be some prizes on the way if you leave some awesome comments. We all look forward so much each year to this wonderful 31 day of creepiness....


The dust bunnies were getting quite angry. They had kept the peace in the sleeping room for the last 200 years. But now it seemed there was a change coming.
They had made sure that the creatures under the bed were managing ok with divans. (Honestly who thought up the idea of having the base of the bed so close to the carpet.)
The thing in the cupboard had originally agreed to only appear Monday to Friday but now was not just scaring the sleepers but also the cleaner and a burglar or two and was more out of the cupboard than in..
But they  had made the mistake of paying a Handy-Creep to make some repairs. She had been very industrious and had not only oiled the floor near the top of the stairs but had also oiled the hinges on the cupboard, the latches on the window and the door handle. She knew she had to work hard with a business start-up grant and had hoped to get further work when the accidents started happening..

Posted by applejack cards by sue at 23:26