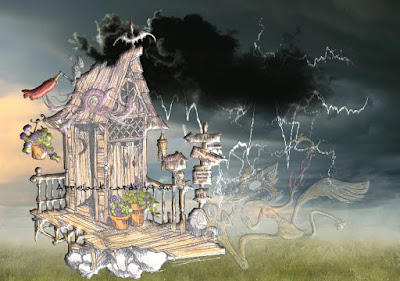 Ghostly Creatures
Part of my huge prize 2015 Halloween Hop
I will be giving the links as soon as I find them
Background Abandoned and Bottle of Ink and Nightmare
for Mischief Circus
Printed onto neenah and coloured with Spectrum Noir pencils
Don't forget to visit the amazing blogs taking part in the hop.. there could be some prizes on the way if you leave some awesome comments. We all look forward so much each year to these wonderful 31 days of creepiness....


Now we have Caroline with a very bad headache in the bathroom if anyone needs 'to go' you will have to visit the outside loo by the back door. Luckily Leigh and Mary escaped the bathroom.. all limbs intact leaving a trail of popcorn.
We are going to need postal rats... messages need to get to  the lakeside. The creatures there are experienced and brave. The Dust Bunnies themselves couldn't leave the house... they would be blown away like tumbleweed. The cellar rats agreed to go after finishing off the popcorn. This time they were going to leave by the back door, they had lost some of their family members to the velvet fiend by the front door and they weren't going to get caught out again. Some of the larger spiders rode the rats as they could shake off some of the droplets of potion more accurately.
Thing wasn't going to leave quietly. He found his way to the afterlife was blocked by something resembling cold porridge and really could we blame him for not wanting to oooze through it... he was now just a ghostly figure haunting the outside loo. As he died near a loo so he ended up stuck near one.
Lightening was crashing, illuminating  the cracked timber and peeling paintwork and Thing wasn't alone. Squee was there on the roof glaring cross eyed and trying to hold his nose against the stench (not a good look).

Posted by applejack cards by sue at 23:53