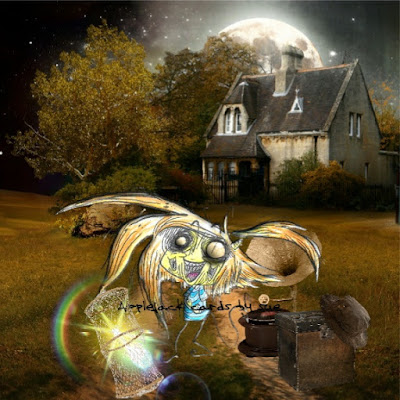 Devil Boy
Part of my huge prize 2015 Halloween Hop
I will be giving the links as soon as I find them
Background
Mischief Circus
Printed onto neenah and coloured with Spectrum Noir pencils
Don't forget to visit the amazing blogs taking part in the hop.. there could be some prizes on the way if you leave some awesome comments. We all look forward so much each year to these wonderful 31 days of creepiness....
Val and Nan had arrived safely at Val's B & B. They had one of the Christmas Special huge jar of jelly beans (On offer at Tesco's)  to give Darren as payment for cleaning the outside loo and surrounding area.. There had been a post it note in the Bestiary Book alongside the picture of a Devil Boy stating that they are ok with being paid in beans. After all... Jack sold his cow for a handful of beans and they weren't even the jelly ones so it had been a well known fact that in certain parts of the Country beans are legal tender.
The ladies helped with Darren's luggage. One gramophone, a box of stuff, old hat and an extra special fishing keep net. The sparkle from the net could not be hidden so they just let it shine - quite good really as it didn't need batteries and shone all the way back to the house.
As they reached the house they noticed the couch was still munching on some spare rats (just a snack) so they peeked round the back garden... the stinky cloud was still laying heavily on the browning grass. It was agreed that Darren and his keep net would start straight away making the back garden safe and the ladies would climb back through the pantry window with  the rest of his luggage.
Val climbed up first and Nan passed up the box then the gramophone and the hat then the cuddly toy. As she passed the last item to Val there was a shriek as the 'cuddly toy' turned it's head all the way round and smiled rather unpleasantly.

Posted by applejack cards by sue at 23:45