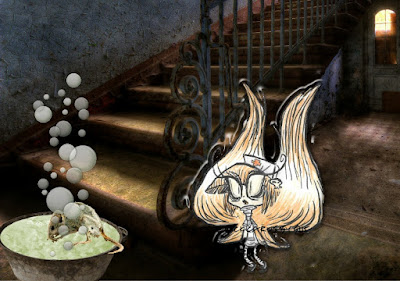 Part of my huge prize 2015 Halloween Hop
I will be giving the links as soon as I find them
Background Abandoned and Welcome to my Nightmare
for Mischief Circus
Printed onto neenah and coloured with Spectrum Noir pencils
Don't forget to visit the amazing blogs taking part in the hop.. there could be some prizes on the way if you leave some awesome comments. We all look forward so much each year to these wonderful 31 days of creepiness....


The nurse skittered to a stop beside the bowl which still had a quantity of mush available for testing. Joe had been reduced to nothing but bones. No-one was around to notice that Penny looked a bit like Chuckles (The Handy Creep) if you could see through the glamour. It wasn't only vampires who had that talent.
Anyway, Penny scooped up Joe's remains without dripping any on her shoes which just so happened to be the extra special Jim Chews she had been saving for... for ages. Now she had Joe's bones she could start saving for the Burntkin handbag to match. Oh dear.. her mind was wandering off on it's own again. Hopefully not too far, last time she had to pay to get it back again.
Catz (my scientist (yes really) friend) had already been building her lab in the cellar and was waiting for Penny to bring samples for testing. That potion from the were-rabbit was strange stuff and the instructions should have been followed.. but no.... those extra tomatoes just changed everything. As Penny was opening the cellar door (which didn't creak due to excessive oiling) the eye watering, squealing, shoulder twitching, sound-feeling was getting louder...
Posted by applejack cards by sue at 23:17