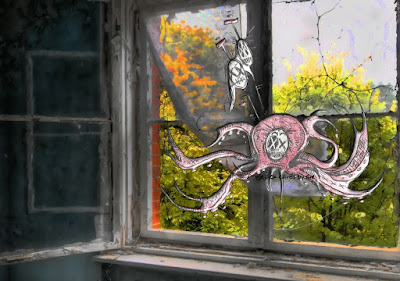 Part of my huge prize 2015 Halloween Hop
I will be giving the links as soon as I find them
Background Abandoned and Welcome to my Nightmare
for Mischief Circus
Printed onto neenah and coloured with promarkers and Spectrum Noir pencils
Don't forget to visit the amazing blogs taking part in the hop.. there could be some prizes on the way if you leave some awesome comments. We all look forward so much each year to these wonderful 31 days of creepiness....


Val had arrived with Mary just a little too late to help our Joe but they followed the trail of popcorn upstairs being careful of the oil and the strange glistening spiders. Their shoulders tensing at the old remembered feelings...
Squeee who usually kept the other side of the window couldn't see why he couldn't come inside.. after all his claws could be just as shrill one side of the glass as the other. He was watching all the goings' on and wondered when to make a move. He spent some time filing a few of his finger nails so he could make the good old fashioned sound heard in classrooms as chalk squealed down the board. sometimes a teacher would use chalk and sometimes a Squeee. He wondered how many children realised that the chalk rubber thrown at their heads wasn't to stop them talking but to dislodge the Squeee as he crawled up an unsuspecting arm.
With a circular movement Squee managed to cut a hole in the glass large enough to squelch through without too much damage.. just losing a few suckers on the way. Once on the inside he knew he wouldn't be able to get back outside because of the fancy net curtain draped across the hole... the curtain kept sticking to his remaining suckers.
The killer couch out on the porch was recruited to give a warning of any undead uninvited creatures arriving. The Dust Bunnies were trying to gather their families. The younglings needed to be kept safe whilst the battle for the sleeping room took place. Suddenly there was a high pitched scream. Squee tried to hang onto the curtain as he was being pinched and pushed back through the hole and was dangling above the couch which opened it's cushions like a dusty velvet gin trap.


Gin traps were the mainstay of trapping for Gamekeepers, Farmers, Smallholders and Gardeners in the UK until the were banned in 1958. For many people interested in trapping history a good specimen of a Gin Trap is an essential part of their collection.
Just for the benefit of doubt, it is illegal to use all forms of Leg Hold Trap, (such as the Gin Trap) in the UK.

Posted by applejack cards by sue at 23:23