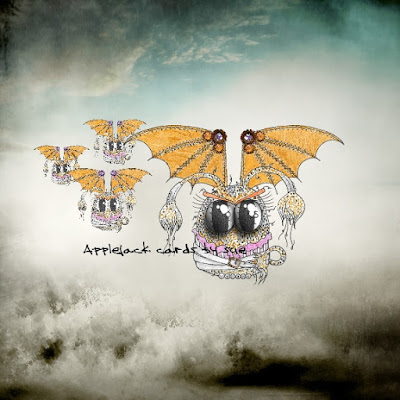 Winged
aka Cuddly
Part of my huge prize 2015 Halloween Hop
I will be giving the links as soon as I find them
Background
Mischief Circus
Printed onto neenah and coloured with Spectrum Noir pencils.
I have used one of the water droplet images from a free kit called Water Garden available from Craft Artist over the creature's eyes. I think it makes the eyes pop.
Don't forget to visit the amazing blogs taking part in the hop.. there could be some prizes on the way if you leave some awesome comments. We all look forward so much each year to these wonderful 31 days of creepiness....
Nan stepped back hurriedly and threw what she thought was a toy away from her. The 'toy' immediately took flight  and, as it did so, it's wings gave a shudder and sprung into action. As Leigh hung out the window Nan had a few jelly beans for medicinal purposes.. beans would have to do until they could get the wine open.
As Cuddly rose into the darkening sky he was joined by some of his clan who had tracked him to the house. The beat of their copper wings made quite a down draft  which in turn caused the cushions on the monstrous couch to blow across the porch, down the steps and across the path. The couch lifted up it's fancy trim and flounced after them. The porch was now a safe zone or at least not quite so dangerous as before. Nan was able to get in by the front door and joined Leigh in the pantry watching out the window at the passing Wingeds. There were a couple of bottles of Elderflower wine on one of the shelves covered with dust and cobwebs and the ladies were just reaching for them when in walked one of the Were Dust Bunnies who shrieked out a warning before one of his cousins got crushed. Turns out... Bonnie D Bunny had been trapped in a web which had been spun across the bottles and she was screaming without making any sound hoping and making deals with whoever or whatever could help her in her hour of need.

Posted by applejack cards by sue at 21:08