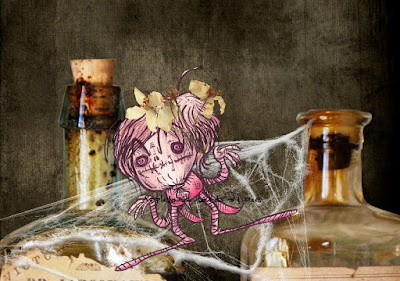 Part of my huge prize 2015 Halloween Hop
I will be giving the links as soon as I find them
Background
Mischief Circus
Printed onto neenah and coloured with Spectrum Noir pencils and Promarkers
Don't forget to visit the amazing blogs taking part in the hop.. there could be some prizes on the way if you leave some awesome comments. We all look forward so much each year to these wonderful 31 days of creepiness....
Val had remembered the Elderflower wine left over from Christmas and had followed the trail of dusty footprints into the pantry. She immediately realised the danger and reached for the furniture polish which she bravely aimed in an arc between Bonnie and the Were Bunny and back again. This brought the situation to a complete halt. Everyone took a breath. Nan disentangled Bonnie.. Leigh found a feather duster and flicked away the web and Val had a sit down. Bravery really 'takes it out of a person' and the best thing to do is to have a rest in a pantry with friends and a couple of glasses of Elderflower wine.
Once everything was calm again the wine was being poured into rather jammy jam jars for the ladies and the corks were given to Bonnie and the Were Bunny to chew. The corks wouldn't be needed again and it would be considerably safer for the Dust Bunnies to get the wine from the corks instead of dripping any on themselves, after all, everyone remembered what happened last time they were given wine and Uncle Bob just turned into rather a tangled mess when he missed his mouth and the wine dripped down his front. In fact he became so unravelled that Auntie Tess tried to knit him together again and realised some bits of him were missing. She suspected that a youngling Dust Bunny had gathered up bits of Uncle Bob and with a bit of stretching managed to add the bits onto himself making him look more feral and quite attractive.
Posted by applejack cards by sue at 23:23