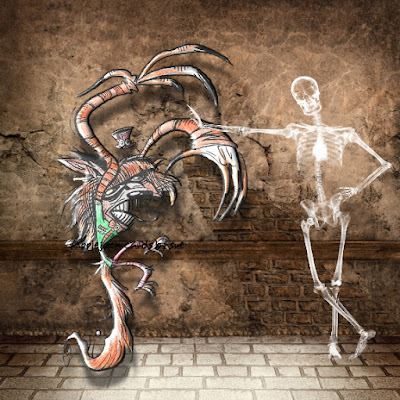 The Bump in the Nights remembered to take their slippers off before stamping their many feet... They were fairly new at all this scary stuff but were quick to learn. They wanted to be in charge of the room, that would be enough to start with.
The Skeletons knew that as soon as someone posted on Bloodbook about the changes in leadership of the room that it would be a free-for-all. They tried to hold back the Bumps but it wasn't easy. Luckily Joe had made it back with Sarah and Michelle who ran up the stairs avoiding the slippery bits. Joe wasn't so lucky and slipped and bounced hitting every step on the way down, his shriek was heard throughout the house. He didn't live long enough to know that he'd had a soft landing.
There was a bowl of something near the skirting board which smelled rather mouldy. When Joe arrived at the edge of the bowl he started transforming.. slowly melting but not before the bowl had tipped slightly spraying some of the contents over the spiders who carried the liquid on their backs throughout the house.  Patrick Bump thought maybe it was one of those casseroles Things left after one of their chaps had died. The bowl was carried back into the Spanish chest and shared out.

I would like to enter this into the following challenges