Day 1 of The Halloween Hop 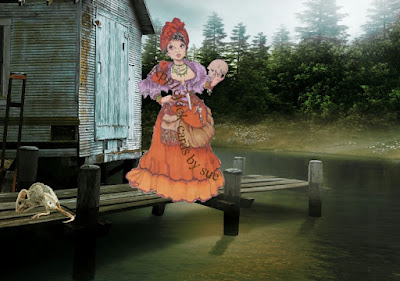 Mama Mumba Voodoo
by Rick St. Dennis
Background Welcome to my Nightmare and The Lakehouse
for Mischief Circus


As Mama Mumba strolled along the jetty by the old boathouse she could sense  something in the air.. just as she could smell the ozone before it rained.
In the old Boathouse something was stirring, growing, taking shape and pulsating. In the corner furthest away from the door the shadows melding into one mass. No rats entered the Boathouse anymore... too many had entered and not returned to their nests... As dusk began to take over the lakeside slight rustling could be heard with a struggle breaking out amongst the small furry animals when one had to be chosen to be sacrificed to keep the Being sated. The rats knew not to venture close so it was up to the rest to sort it out amongst themselves and the rats would clear the detritus at dawn. Several of the voles had gathered around an old water rat. The voles eyes glinting red in the moonlight as slowly but surely they moved him towards the hidden gap under the boards to the side of the main door. The old rat was confused. He could smell something so sweet and enticing which confused his senses and very soon the voles didn't need to encourage him.. he just carried on walking slowly, shuffling and unsteady on his old legs. There was a glow showing through the gloom as the old rat made his way through the gap bending his aching legs and creeping slowly and swaying in time to the waves lapping against the struts.. There was that scent again.. something so beautiful, so hypnotic so enticing.

This is for the Smeared and Smudged wonderfully spooky hop. If you are hopping you should have arrived here from the amazing Maureen and your next stop is the fantastic  Domino Art  Have fun Mwahaha
Posted by applejack cards by sue at 23:24