Day 4 of the Halloween Hop 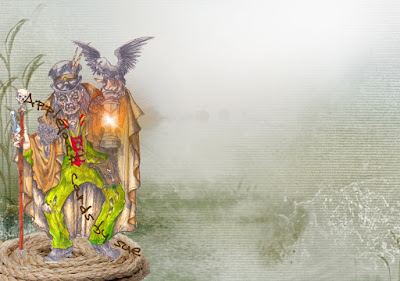 On the other side of the lake life was going on almost as normal. Dr Doom was responsible for the upkeep of the waterways in these parts and he would have to report back to the town council about the missing wildlife. There were a few water rats missing but really no-one seemed that bothered. The Roach were swimming around delivering messages and the Carp were keeping a watchful eye on the Kingfisher babies. One had been lost yesterday morning and the parents were distraught. Amongst the families who had chosen to stay it was known and accepted that the Water Snakes would take one or two babies or the infirm voles so they had no reason to lie. Kingfisher Baby hadn't been written up on the Menu and snacks such as these would not have been wasted. It was becoming very unsettling. When the old Rat also went missing a search party was assembled. the area where the rats went to die was empty. The Buzzards were asked if they had cleared up, the Snakes sssaid they hadn't feasted on rat for weeks. Some of the larger teen rats were ready for a fight so to keep them away from the more tranquil areas the voles were trying to persuade them to swim across the lake at dusk when the sun was dipping into the reeds and the glow started to light up the boathouse. Much muttering was heard as the rats tried to get a better deal but eventually three of them started out, swimming strongly against the pull of the reeds which felt like hundreds of tiny fingers grasping and tangling around their feet.. one rat tried to scream as he was pulled under the surface but nothing escaped him but a gasp.

Posted by applejack cards by sue at 23:05