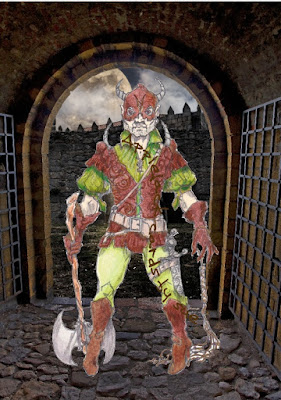 Executioner
by Rick St. Dennis
Background
Welcome to my Nightmare
for Mischief Circus

This is the alley you have been warned about as in 'I wouldn't like to meet him/her down a dark alley'.

The Executioner had heard about Sassy and had vowed to avenge her. He had sent word to the Pumpkin Patch. A call to arms for the coming battle. Some of the Pumpkin heads didn't look that scary but when the need arose they would be ready. Also the younger looking witches.. they were already angry at the 'Youth' spell backfiring and making them look about 12. Freda said the spell had been read backwards and she should be 21.. now how were they going to get served in the pub? R.S.V.P.'s had been answered and the ladies were getting ready. Nan and Donna had boxes of salt and bags and heaps of salt ready by the lakeside. Mary and Squiddy had rounded up several Nanny's who brought their Tardis-like handbags. Susan and Leigh had already hung out two washes, made sandwiches and tea for everyone and prepared themselves for attack. The surviving rats gathered in the Ghouls attic mending tails and patching the bats wings. Damien spent what was to be his last day on earth opening those tiny bags of salt. Don't forget ladies.. wear comfortable shoes and big girl knickers.

This is for the Smeared and Smudged wonderfully spooky hop. If you are hopping you should have arrived here from the amazing Maureen and your next stop is the fantastic  Domino Art  Have fun Mwahaha
Posted by applejack cards by sue at 01:13