Day 11 of the Halloween Hop 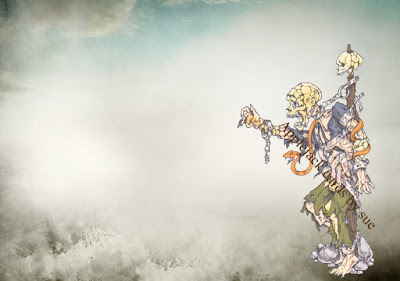 After Days
by Rick St. Dennis
Background Lake House
for Mischief Circus
On the approach to the dwellings they found a disemboweled body chained to a stake. A normal signpost for Ghouls.
The first house they came to belonged to a ghoul who only agreed to allow them in if the rats were made to promise not to gnaw on his remaining leg. He had every right to complain as last Winter a group of Rats had found their way in through a cellar window and had chewed off his left leg whilst he slept and without him noticing. The leader of the teen gang of Water Rats stated.. with much bristling of whiskers.. that they were, in deed Water Rats and that the culprits were Sewer Rats. Different colours, different tails. Discussions went on through the morning and it was decided that this house would be given full security systems as this would be the last stop for the witches before the lake. Mr Hare started on the loft conversion which really only consisted of the removal of several tiles in strategic places for the bats to gain access.. that was of course if the Village bats would join forces with the remaining Lake Bats. Mr Hare wrote a note to be taken to The Insane Mr Hare which hopefully would give him all the information as to what had happened at the Lake. The note was given to a swarm of Postal Bees who left the house in an arrow formation.