Day 15 of the Halloween Hop 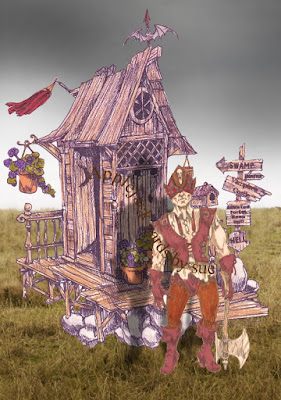 Haunted Outhouse and Executioner 2
by Rick St. Dennis
Background Welcome to my Nightmare


They trundled by a spooky old loo collecting a retired executioner on the way. It was lucky that at his retirement 'do' they let him keep his lucky axe... even tying a ribbon round the sharp bit. Billy (The axe man) agreed to most of the terms of employment but with his own clause.. two be-headings would be added to the contract without extra charge. Billy knew he would stand shoulder with Damien when the time came to rid the lake of the Entity within. It should be made clear at this point...this is not The Executioner but An Executioner. Just as handy with an axe but not the love interest in this tale of woe. He knew from past experience roughly how to defeat an Entity. It would have something to do with salt, and a lot of it. He knew it was no good asking the snails, they were dead set against the stuff..the same went for the slugs which had mysteriously disappeared from Billy's geraniums. Billy posted a request online for as much salt as folk could spare. Ho hum..chips in the local cafe would never be the same again.


This is for the Smeared and Smudged wonderfully spooky hop. If you are hopping you should have arrived here from the amazing Maureen and your next stop is the fantastic  Domino Art  Have fun Mwahaha