Day 30 of the Halloween Hop 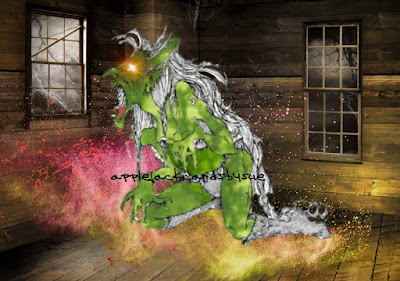 Banshee
by Rick St. Dennis
Background The Lake House and Special Effects 2 and 3
for Mischief Circus

The Banshee was waiting. Her simpering sisters were still loved for their wailing at gravesides and the sorrow they showed when a human was in mortal danger. Sandra was a modern Banshee.. she preferred to be the cause of their anguish not to just wait and squeak.
The day started early. Several Pumpkin heads had grouped together in their tribes and lay in wait. One would need to sacrifice himself, to take one for the team. Sam had agreed to put himself in danger and laid as still as he could among the vegetable pumpkins ready to be harvested. If he timed it right he would escape the jaws of death otherwise known as a Harvester but he had to stay just as long as possible.. until his very life was in danger and then just a little while longer. Sam prepared himself and dug in. And waited. He heard the rumble and the ground beneath him began to shake just ever so slightly, he waited just a little longer until leaves from the pumpkin in front of him started shredding.. Then... the screaming started and ears started bleeding.

Posted by applejack cards by sue at 23:10