Day 21 of the Halloween Hop 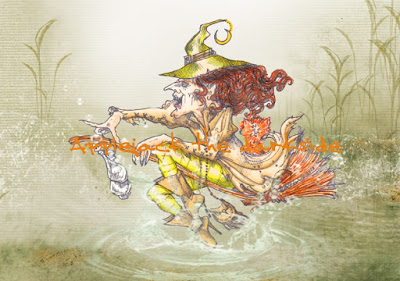 That-a-way Witch
by Rick St. Dennis
Background Lake House
for Mischief Circus
Tipsy and the witch (In disguise) lined up behind the slime line made by the snails and waited for the signal.
The Challenge was about to take place . Donna kept an eye on things and offered to referee proceedings .. she was not at all convinced that there would be a fair race.  Gary had been up since first frogs croak and had ran as fast as the wind round the lake. Not the way which would take him past the boathouse but the other way.. past the graveyard. He ran till his toes burned with his powdered bobtail sticking straight out. He ran like his life depended upon it.. ran to save Bunny kind. Gary ended up in the bullrushes where he re-fluffed his cheeks and checked his bobtail.. he had to shake a bit of bullrush fluff onto it to make up for the lack of powder. Then he stood in amongst the Rosebay Willowherb with his powdered tail pointing towards the lake and waited. A fox scream started the race and immediately Tipsy jumped backwards behind a rock. The witch saw Tipsy jump and grabbed her broom and kicked off the ground. Suddenly ahead she saw Tipsy in the middle of the lake. How on earth did that happen? Of course what she didn't see was Pippa still on the bank.. all she saw was a reflection in the mirror and screamed as she skimmed over the water seeing Gary on the far bank who she thought was Tipsy. No fluffy eared little bunny was going to show her up. Then quicker than suddenly everything stopped. The witch was just a little confused and wet. Why was she wet? And why couldn't she breathe. And why wasn't she anything at all. Something slapped against the lake surface and dragged the witch under and just spat out her broom.

Posted by applejack cards by sue at 00:28