Day 9 of the Halloween Hop 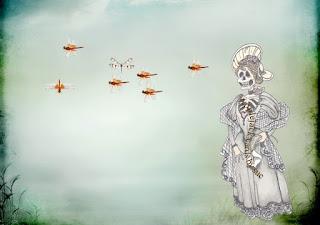 The lake had been going through so many changes, even having large waves which lapped the shoreline, washing into the small house burrows and dragging away the tiny rat and vole babies. No family went without disaster hitting them squarely between the whiskers. The neighbourhood ghosts had agreed to join with the dragonflies and Mr N.Q.S.M. Hare. The ghosts always waited to see which was the winning side before committing themselves to a battle. Typical, but there was no changing the facts. I suppose as they had already died and knew what to expect if they were to go through the procedure again you couldn't blame them for staying at the back of an attack which, in all honesty wasn't going to help them in any way. It was decided that they would set off at first light with enough supplies and extra dragonflies just in case.

Posted by applejack cards by sue at 22:25