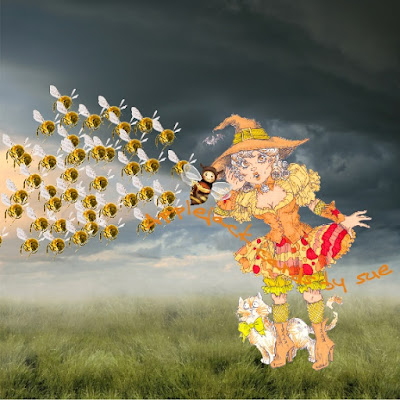 What was that?
by Rick St. Dennis
Background
for Mischief Circus

The postal bees arrived at the Insane Mr Hare's Teashoppe. Lyneen had prepared a large bowl of honey ready for their arrival so that they could have a snack before passing the message on. Now came the tricky bit. Each Bee had been part of the message and they now had to get into message formation (As opposed to arrow formation) They all had a tune to hum.. they were well practiced and could harmonise perfectly. As each Bee knew when to hum so they knew where their place was in the formation. Once they were in formation the message could be read. Bert wasn't included in the final hum.. his stutter put them all off, instead he was given the job of reading the message and checking all were in the right places. Bert was a clever Bee, one of the best. Sally listened in horror at the plight of the lake fauna. She wrote down the message and lit a fire beacon. She also collected salt from all her neighbours and began a spell which would condense the salt into a more manageable form.


This is for the Smeared and Smudged wonderfully spooky hop. If you are hopping you should have arrived here from the amazing Maureen and your next stop is the fantastic  Domino Art  Have fun Mwahaha
Posted by applejack cards by sue at 00:03