Day 6 of the Halloween Hop 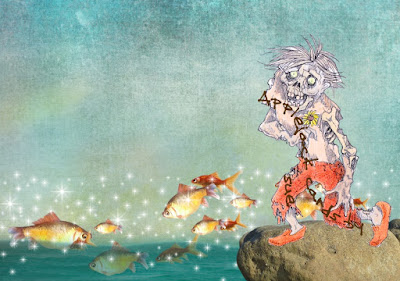 Just because he had forgotten to collect Bert from the Hospital last year Kevin didn't think he should be left here on his own to keep an eye out for whatever was stalking the lake. There certainly was a lot of splashing going on and he very nearly got wet twice. Not something a teenage zombie would want or need! Luckily Nan had heard about the goings on at the lake and she was ready to assist Kevin in any way possible.
From the riverbank tiny shrieks could be heard as the moths realised something had happened to the bats. They hadn't yet ventured out across the lake. The lights on the old boathouse weren't bright enough to attract them so they agreed to just fly near the reeds tonight to try and see what had plucked the bats out of the sky. Their leader reported back that all was well.. nothing to see here. The teenage Carp grouped together to patrol the weeds.. still nothing was seen until a splash and such a commotion right in the middle of the lake.. and a huge tail flipped up into air and slapped down into the water stunning the Carp senseless. A whole generation of Carp were never seen again. Terror started filtering through the Water Rats and Voles, they were in such a panic and a meeting was held underground where the air was sweet and death didn't come quickly, soundlessly. It was decided to send for help.

Posted by applejack cards by sue at 23:14