Day 29 of the Halloween Hop 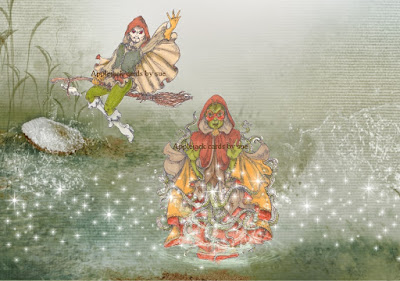 Early in the morning Nan drove the truck with a huge tank ready to collect any remaining fish. The spell made sure no fish would be left stranded in the lake. A portal opened to allow the fish and any of the smaller rats to travel into the tank without drying out. Then the truck was driven to a safe distance and Nan ran back to take up her place by the bull-rushes. Donna and Leigh started spreading salt around the edges of the lake so that nothing would escape. The Warlock was ready. He had filled up his broom saddlebags with salt crystals and rose silently into the dawn sky. Everything was quiet by the lake. The Zombies had arrived with the Trolls and helped throw more bags of salt into the now roiling waters. The inhabitant of the lake rose up and grabbed the Troll sisters and dragged them to their deaths. Before anyone could react the Executioner became entangled in the tentacles and managed to cleave three of them before throwing his stash of salt into the cut edges which foamed and fizzled. As he dropped back to the ground he hit the ground running... warning everyone to keep back away from the lake edges. A catapult set up by the witches managed to throw it's load almost into the middle of the lake then everything seemed to happen at once. Screams could be heard from the other side of the lake as Kevin the elf was dragged under. Tipsy caught hold of his flailing arm and Fifi ran along it to safety. One last tug and Kevin shot out of the water.. very bedraggled but alive. A cheer went up from the skeletons as Kevin had promised to cook for them next Monday.  The Warlock started dropping salt bombs and from the lake side the rats and bats joined in throwing the deadly salt. The Warlock was flying lower than he would have dared normally. He was being chased by the now rather shriveled Entity when he slammed on his brakes and the Entity passed him by. The Warlock now had the creature in his sights and gave a final flourish with both his wand and the last of the salt and the Entity burst into flames.