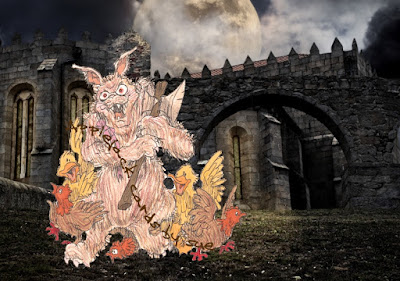 Tipsy had made her way back to the witch's shack. She squirmed through the elf door and made her way to the cupboard. The bottle was just a bit tricky to open with paws and as she held it up to her mouth she drank more than she should have. All of a sudden her fluff didn't fit. Everything was getting stretched way beyond snug. Tipsy had to loosen her ribbon as she grew from kit size to witch size and suddenly she filled the room. As she clattered towards the door she collected an axe and the witch's chickens and ducks. No one was going to mess with her bunnies! Tipsy also dragged the biggest sack of salt she had ever seen all the way to the ghoul's house even stopping off at sundry fast food outlets just to stock up on more tiny packets... that was why she had brought the chickens. They would be quite happy to sit with Nan and rip the packets open.. they only hoped they would be in time. They had heard of strange goings on in an alley way near the Tea Shoppe.

This is for the Smeared and Smudged wonderfully spooky hop. If you are hopping you should have arrived here from the amazing Maureen and your next stop is the fantastic  Domino Art  Have fun Mwahaha
Posted by applejack cards by sue at 23:00