Day 20 of the Halloween hop 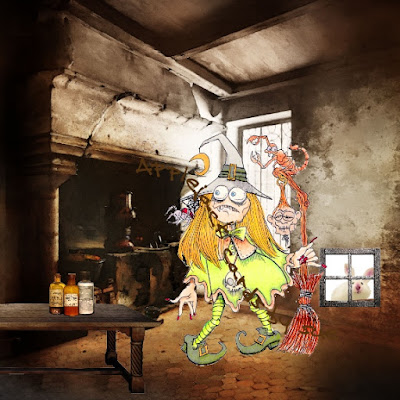 Willaworm Witchypoo
by Rick St. Dennis
Background Alchemist
for Mischief Circus
The bunnies lives were in danger. Tipsy made sure that Pippa was waiting in line opposite a piece of broken mirror but still crouched down. They checked that Gary was on the other side of the lake.. they could barely make out his shape but trusted that he hadn't muddied up his little bobtail. Tipsy then visited the old shack.She had never felt so scared in her life..Bunnykind were relying on her and it made her ears twitch! Tipsy put on her bravest face and knocked on the door and tried not to jump when the door slammed against the wall as the witch opened it so quickly hoping to frighten anyone who dared to disturb her morning cocoa. It almost worked but Tipsy was feeling lucky. She had, of course, four lucky rabbit feet! Tipsy challenged Willaworm to a race straight across the lake in exchange for a potion to save the lake rabbits. They discussed terms and conditions and Tipsy watched through the elf window (one quite close to the ground) whilst the witch made up a potion and made a mental note where it would be kept whilst the race was on. All was ready.

This is for the Smeared and Smudged wonderfully spooky hop. If you are hopping you should have arrived here from the amazing Maureen and your next stop is the fantastic  Domino Art  Have fun Mwahaha
Posted by applejack cards by sue at 00:10