Day 7 of the Halloween Hop 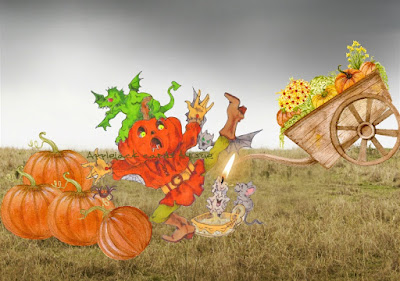 Eek a Mouse
by Rick St. Dennis
Background
for Mischief Circus
The pumpkin patch near the lake had been recently harvested. Charlie did his best but still that fear of mice. He was totally prepared to combat any Demons, Witches or sundry bad guys but mice.. it had to be mice...
The local rabbits did offer to leave the lake straight away, in fact a cousin of the Mad Mr Hare said he would be happy to take on the task for a price. It was agreed that the Not Quite So Mad Mr Hare would take a few of the Rat rangers with him as backup with a squadron of dragonflies as look-outs. Mr N.Q.S.M. Hare didn't think the dragonflies were up to the job but agreed that if they could prove themselves against the Water Boatmen in test trials then they could indeed join forces. The trials were scheduled for the next morning. Five Water Boat men limbered up ready for the speed test - they had never been beaten by any other insects and there was no way any pretty fly-boys were going to win the first race. No-one could have predicted what happened next. The Water Boat men were already by the lake when a gasp could be heard. The dragonflies marched up to the starting platform. Still so beautiful but with such determination and poise and a wave of anger about them. No animal who saw them ever called them pretty fly-boys again.

Posted by applejack cards by sue at 23:09