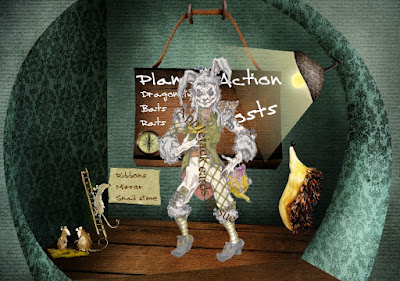 Mad Mr Hare
by Rick St. Dennis
Background Mice
for Mischief Circus
Back at the lake all was still. No-one knew if the messages had reached the town. The rabbits were skittish and hopping over each other in panic. They knew that they would be considered tasty therefore worth sacrificing. Tipsy Bunny was not going to let that happen. The rest of the kits in her family relied on her to keep them safe and no-one was going to nibble on a bunny if she had anything to do with it! Tipsy needed a potion and the only way she would get one would be to challenge a witch and force her hand. Luckily Tipsy didn't look a threat to anyone let alone a witch of the Lake. On the morning of the challenge Tipsy made sure she looked sweet. She fluffed up her cheeks and powdered her bobtail. She borrowed the prettiest ribbons and had the rest of the kits ready. Pippa Bunny dressed exactly the same as Tipsy.. same fluffed up cheeks, same powdered bobtail same ribbons. Gary Bunny was in a strop. He had his cheeks fluffed.. his bobtail powdered. Gary hated ******** ribbons!

This is for the Smeared and Smudged wonderfully spooky hop. If you are hopping you should have arrived here from the amazing Maureen and your next stop is the fantastic  Domino Art  Have fun Mwahaha
Posted by applejack cards by sue at 00:23