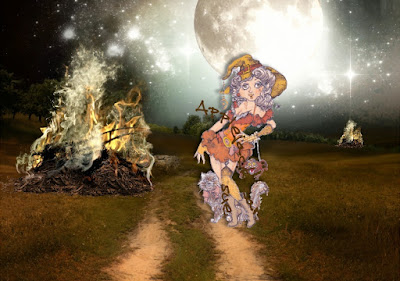 Hannah
by Rick St. Dennis
Background Welcome to my nightmare
for Mischief Circus
As they passed by Hannah's house they told her what was waiting down by the lakeside and a warning fire was lit,. A message passed on so quickly from tower to tower along the village road. The sight of the burning fire towers alerted the Warlock who collected his super charged sports broom from the pantry, two potion bags, a first aid kit and a sandwich. He sat astride his broom, checking the landing lights were on for later, and kicked off into the humid air ready to rescue his beloved. He then remembered he had his phone with him so rang her and heard a rather garbled message on her answer phone. Something about bats, trolls and Don't be late for dinner. He also received a message about a serious lack of salt, or at least that was what it sounded like. Hannah had asked Donna to organise a collection which Nan managed to cram inside her backpack as she sped across the field towards the ghouls house making sure she didn't step in any puddles. We all know what lives in puddles!