Day 10 of the Halloween Hop 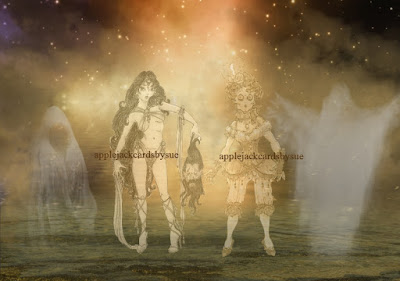 Finale of the Dance and Tottenham Ghost
by Rick St. Dennis
Background Special Effects 2
Ghosts from One Ghostly Night
At first sparrow's cough the team assembled. The ghosts were the only ones not ready. Their excuse was that they had been busy all night keeping watch over the lake and boathouse. No-one believed them.. a fox had seen them out carousing with some zombies round the back of the cemetery and had made them all jump with one of his shrieks which, quite fortuitously had attracted a lady fox into the area so not too much of a waste of time.
Mr N.Q.S.M. Hare led the way with a few teen rats (eager to earn their crown tattoos) following and several ghosts bringing up the rear. The dragonflies were circling overhead-flying so fast they reached the first house and flew back to the group three times before the rest caught up. They wouldn't have been any good trying to explain the situation as they spoke so fast human/witch ears wouldn't have been able to decifer what they were humming about. Even the bees have problems understanding dragonflies when they get over excited and bees can humm so fast..except for Bert who has a bit of a stutter.

Posted by applejack cards by sue at 21:45