Day 13 of the Halloween Hop 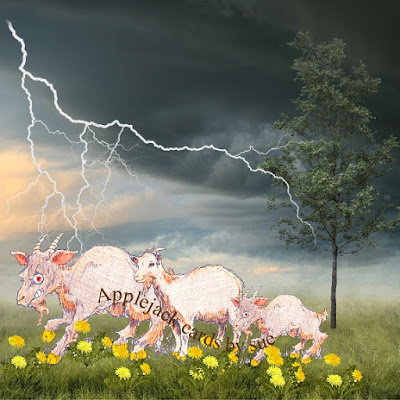 
Two of the zombies stumbled along behind the mice just to make sure the mice wouldn't be stood on.. well that was the idea but the speed those little mice ran at (even slowing down for wee's every inch) they were out of sight even before the zombies reached the porch. The mice then scattered so as to present a less than tight target.. they didn't know who to trust and just needed to get to the caves before Troll lunch time. It wasn't worth the risk, just in case the Trolls were on a slimming program... and had gone off goats preferring to snack on mice.. They had passed some goats with their belongings in checked bundles tied to sticks who told the mice they were looking for a vacant bridge. The goats had had enough! The trolls had been charging everyone who wanted to pass over the bridge. And what right did they have to call out anything about Billy Goat Gruff? The goats had read their comments on Bloodbook (If you remember from last year, it's like Facebook but messier) Nobody like being trolled and to be trolled by actual trolls was just bang out of order!

Posted by applejack cards by sue at 00:16