Day 14 of the halloween hop 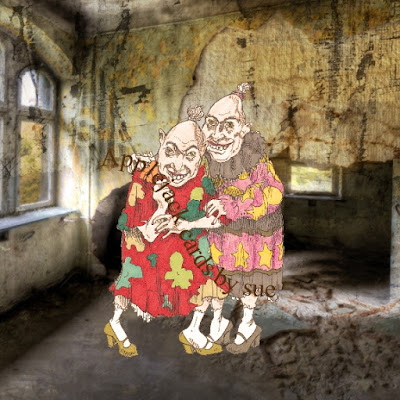 
The Trolls had just finished second breakfast which should not be confused with brunch or even an early lunch as the two breakfasts merged almost as one yet with subtle differences. This was possibly the best time to knock on the skull postbox to attract the attention of Jenny-the smallest Troll as she wouldn't be looking for her next meal just yet. Unfortunately she did stand on two of the mice
(which Squiddy had dug up having previously buried them in her garden) before she noticed them and bent down and plucked their remains from between her toes and nibbled on them as she gazed rather confused, at the zombies in her garden. Jenny grunted a greeting as her beffudled mind struggled to cope with the mice hanging onto the dragonflies feet and the zombies wandering around the patio and weeing in the flower tubs... also, somehow so many guests for lunch. She started opening cupboards for extra chianti nouveau (The one with a hint of graveyard and a blood bouquet)
The Trolls agreed payment and started shuffling fairly slowly towards the lake following the same road as the goats whose scent lay heavy in the late morning sunshine. Jenny said it was just like having a 'take away' delivered and you couldn't get fresher than on the hoof.

Posted by applejack cards by sue at 00:00