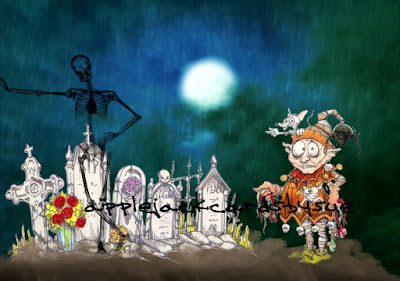 Graveyard Phantom Rest 2 and Snakes and Rats
by Rick St. Dennis
Just because he has jingle bells on his collar does not mean he should be unemployed during Halloween. Kevin is monitoring the snake population at the Cemetery and when asked which species had survived he was able to say, with confidence, Red and Gold ones and Green ones. The skeleton had been residing there for  decades and had seen entities come and go but this was the first time the snakes had left. Kevin the Elf was trying to keep his rats safe but it did not help matters when Fifi popped up from where he was hiding on Kevin's hat and pointed to the skeleton saying something to the effect of 'He could do with a good dinner' Kevin had heard that the giant slug was no more (huge thanks to Squiddy and her hooker comments- great right hook) and he had found a load of rock salt behind the council offices and had a digger ready to collect huge amounts. He would be the Warlocks wing man. He had watched Top Gun enough times to know how to put on the brakes and let the bad guy fly on by. This will be his finest moment.

This is for the Smeared and Smudged wonderfully spooky hop. If you are hopping you should have arrived here from the amazing Maureen and your next stop is the fantastic  Domino Art  Have fun Mwahaha
Posted by applejack cards by sue at 00:24