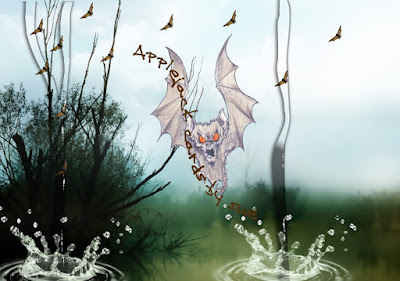 Some of the bats did a fly past as the rats were swimming and to their astonishment the rats were disappearing  straight down under the surface of the lake without so much as a ripple. The last rat to enter the lake was the first to go. The other two didn't notice that their brother was missing. The boathouse was closer now when the second rat vanished.. again straight down, so quickly, not a single splash, not a sound. By the time the bats had wheeled round to begin the search there were no rats to be seen but there was a slight rippling of the lake surface as though something very large yet streamlined was passing by through the dense reeds, cutting them as though they were just wisps of underwater daisies. Then a sharp very fine, very forceful jet of water left the lake and hit two of the bats knocking them out of the darkening sky. Their high pitched screams heard only by their squadron trying to regroup unsuccessfully.. slowly but surely each bat was picked off out of their flight path and ditched into the inky black lake.

Posted by applejack cards by sue at 00:07