Day 8 of the Halloween 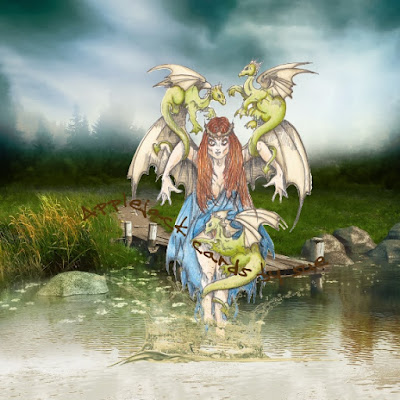 Got Borne Aloft
by Rick St. Dennis
Background
for Mischief Circus
The Dragon Mother had never felt threatened before, never vulnerable, she was powerful, confident.. and trapped. Her foot was caught in a grip of iron. Dragging her under the surface of the lake. Her dragons tried to lift her to safety, they never gave up.. fighting against the pull of unseen fingers. But one by one they too were dragged to a watery  death.
This was to be the day which would decide the fate of the lake inhabitants which in turn would affect the streams running away from the lake into the town and the surrounding houses. Excitement hit fever pitch as the Water Boatmen shuffled into position.. they were so ungainly on land but once in the water could out-skate anything twice their size. The dragonflies readied themselves, their wings gliding back and forth.. still looking rather pretty.... and they were off.
The largest Water Boatman reached the reeds first, thrust out his hand grabbing hold of a bullrush and creating a bow wave as he turned. His son was next into the reeds skittering off a lilypad whilst above the lake the dragonflies were slowing down. They could see what the others couldn't. They sped up.. their wings just a blur and together they dived down catching hold of the flailing legs of the remaining water boatmen and flew straight up saving them from what lurked beneath. Only two were saved that day.